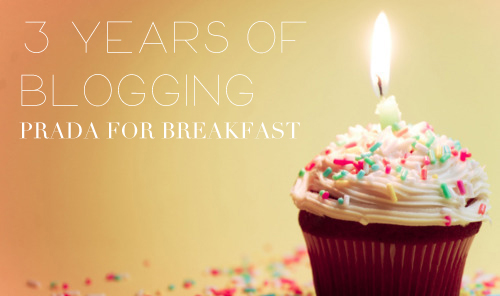 Hello, lovely readers! Today marks the third — yes, third — birthday of Prada for Breakfast AND this will be my 100th post here!

I’m surprised I’ve been able to keep up with this blog for so long, and though I’ve enjoyed the ride so far, I still feel as though the best is yet to come. Blogging here has always been something I’ve enjoyed, even though it tends to fall by the wayside when I get overwhelmed with work (unfortunately). But I’ve always come back to this blog, which is significant considering that my other forays into the blogging world (all pre-PFB — and believe me, there were many) lasted less than a year.

I’m grateful to all of you who read this blog regularly, and those who just stop by every once and a while — every comment makes my day! And speaking of things that make my day, I thought now would be an appropriate time to share a couple blog awards I’ve received lately:

The Super Sweet Blogging Award, from the fabulous Standing Among Stars

As part of the award, I’m supposed to answer the following questions, so here goes…

And second, the Very Inspiring Blogger Award from the lovely Stylish Heath (above)

I’m also supposed to share seven interesting facts about myself, so here’s a bit about what’s current in my life (in keeping with the nature of this post):

I think that about wraps it up. Thank you again to Standing Among Stars and Stylish Heath for the awards, and a huge thank you to everyone who has ever taken the time to read this blog! I can’t wait to see where PFB is a year from now.

I am a sporadic, even capricious, blogger. For that, I apologize. I personally dislike it when bloggers fail to update regularly without due reason. It annoys me more when it’s a blog I’m slightly addicted to, as in the case of Very Mary Kate, whose creator is currently on her second, several-month-long hiatus. What will I do without an abundance of jokes about the Olsens’ diet?

However, I find that this is a phenomenon I cannot avoid, even though there is no true excuse for it. This blog is not my job, nor is it related in anyway — I need to focus on my education for the time being, so much of the work I do here is done over breaks. Hence, a slowdown in blogging whenever I hit September. I’m sure I could curate a blog with pretty pictures I found of editorials (that almost everyone interested in fashion has seen anyway), but that is not what I want to do. I want to write something too (even though pretty pictures are a great bonus), something original, and something with some (albeit disputable) value. But it is, sadly, not a priority, and the fact that I cannot find it in myself to love fashion only exacerbates the issue. I do like fashion, though (a lot), and clothes and books and cooking and travel and photography. And I cannot seem to be capable of confining myself to one topic, either (a great weakness of this blog, in my opinion).

And thus I face “The September Issue” (don’t laugh, let me enjoy my moment of brilliance): the situation which occurs whenever I return to school in September, and lasts through the entirety of May, with the exception of breaks. Education always comes before blogging, and this fact is unavoidable.

But I can try, at least. I really want to be able to stick with this blog, even if I end up as the only person reading it. It is a forum for me to write about or share photos of or reflect on whatever subject I want, and I find that to be pretty rewarding. So I am going to try and keep this blog going, although I can’t promise there won’t be lapses in which I fail to post for a few weeks. I do promise to formally close this blog if I ever truly decide to stop blogging, but I can’t see that day coming anywhere in the near future. I love blogging — I really do — and I love having a little corner of the web that I can make my own.

Now I would like to stop rambling about my personal blogging (and possible time organization or multitasking?) issues and focus on the second part of this post: that being, the actual September Issue, directed by R.J. Cutler.

I’ve had the DVD sitting around for a while, but I never quite got around to watching it (again, possible procrastination issues?) until a few days ago. I wasn’t expecting to enjoy it that much — I can never really (as aforementioned) get super excited about fashion, and I’ve always been partial to Elle anyway.

However, I found it to be quite intriguing and very well done. In some respects, it was the real-world equivalent of The Devil Wears Prada, but it did have a very human aspect to it. I never found Anna Wintour to be as much of an ice queen as people have claimed — I really see her as doing her job and trying to put out the best magazine possible. The Devil Wears Prada takes her character to its extreme — painting her as so career-obsessed that the magazine ultimately overshadows friendships and family. Wintour’s life is obviously not as severe or so quickly defined. During the course of the film, we are introduced to her daughter, Bee Shaffer, who is studying to be a lawyer at Columbia and does not share the same view of the fashion industry as her mother:

I really don’t want to work in fashion. It’s just not for me. I respect her, obviously, but it’s just a really weird industry. She wants me to be an editor. I would never put it down, but I just don’t want to take it too seriously. People in there act like fashion is life. It’s really amusing, but if that’s your career — there are other things out there, seriously… I think I want to be a lawyer. [Source]

Conversely, Wintour claims that people don’t take fashion seriously because it intimidates them, because it makes them “nervous” and “frightened.” I am not a fan of this statement — I found it to be a little assuming and slightly infuriating. There are — surprise! — people in the world who simply don’t care about fashion, who don’t hold it in the same revered light as some. There are also people who can’t afford to dress in designer clothes all the time. (And there seems to be something wrong with defining style by labels, anyway.) Wintour said in the film:

Just because you like to put on a beautiful Carolina Herrera dress or a pair of J Brand blue jeans instead of something basic from K-Mart it doesn’t mean that you’re a dumb person. [Source]

I’m not sure this attitude is intentional, but Wintour does appear in the film as a very self-righteous character, always a bit pretentious and aloof. One former reporter for Women’s Wear Daily took his critique of her persona (dated May 2007, before the documentary was made) to the extreme:

She plays up this aristocratic, Marie Antoinette “Let them eat cake” routine, but, excuse me, can I get some proof that she holds a title of nobility that goes back to the 13th century? No. All she does is edit a magazine. That’s it. So what’s with the royalty routine? [Source] 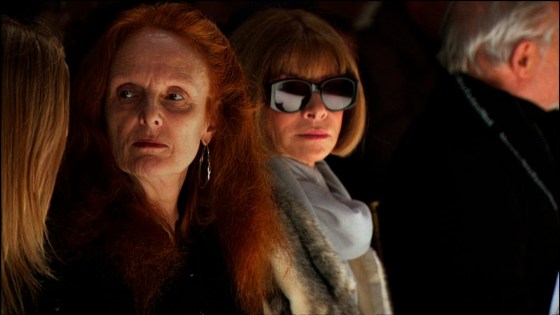 For the most part, I agree. The movie does not overtly rail against Anna Wintour and is pretty unbiased, so much of the interpretation of what she says is left to the viewer. I’m not going to criticize her work ethic — if being direct and harsh works for her and the magazine, then business is business. But I find her affected (or perhaps actual?) haughtiness unnecessary and frustrating. In most of the incidents shown in the movie, I found myself leaning towards the side of Grace Coddington, Vogue‘s creative director. She takes her work seriously, like Wintour, but she comes off as having a very down-to-earth character and is very passionate about what she does. She, like the designers we meet during the film, views fashion (as well as photography) as an art form, and puts together some brilliant editorials for the magazine — many of which Wintour cuts or wants edited. Coddington said in the documentary:

I care very much about what I do, or I still wouldn’t be doing it. But it gets harder and harder to see it just thrown out. And it’s very hard to go on to the next thing. [Source]

I loved her in the film. I didn’t know much about either of these two fashion icons at the start (and still don’t), but Coddington really struck me as sensible, determined, and genius.

This is a must-see, for those who love fashion and for those who just want a good story with interesting characters. It is not your average boring documentary, either — the film is very much about the people in it, not the fashion world itself or the social sphere it occupies.

Quick takes: unbiased, engaging, accurate and nuanced portrayal of characters, good details, the plot sometimes felt unclear in the sense that it wasn’t solely focused on the pressure of the “September issue” itself.

For 2011, WordPress has launched the Post Every Day Challenge to encourage bloggers to become more active in the blogosphere. They’re also supplying bloggers with daily inspiration and blogging tips at the new blog for the challenge, The DailyPost. Posting once every day is, well, impossible for me, but they also launched the Post A Week challenge, so I’ll be signing up for that! I think it’s a great way to get on a posting schedule and also get bloggers more involved with the community. You should consider the challenge, even if you’re not on WordPress!

I’ve decided I want to blog more. Rather than just thinking about doing it, I’m starting right now.  I will be posting on this blog once a week for all of 2011.

I know it won’t be easy, but it might be fun, inspiring, awesome and wonderful. Therefore I’m promising to make use of The DailyPost, and the community of other bloggers with similiar goals, to help me along the way, including asking for help when I need it and encouraging others when I can.

If you already read my blog, I hope you’ll encourage me with comments and likes, and good will along the way.

What are your resolutions for 2011?

I'm a college student. I blog about photography, travel, culture, food, and style. I like taking photos, practicing Arabic, and eating -- a lot. I am also very sarcastic. Eh, sorry about that.
Join 6,442 other followers

Below are some of the blogs I read, sorted by category. Let me know if you would like to exchange links!

All written content and collages © Prada For Breakfast 2010-2014 unless otherwise stated.

The images used on this site are the property of their respective owners. An effort has been made to give credit where credit is due, but if you find your image here and would like additional credit or would like it removed, do not hesitate to contact Prada For Breakfast at pradaforbreakfast@gmail.com.